After saying goodbye and thank you to everyone that helped us with the project, Angela, Rachel, Jennifer, and I got back on the Ranger III for our five hour trip back to the upper peninsula. Once we were back, we stopped at Treats for ice cream (which was delicious, of course) and drove 10 hours back to Lansing!

Posted by Kimberly Anne at 5:21 PM No comments: 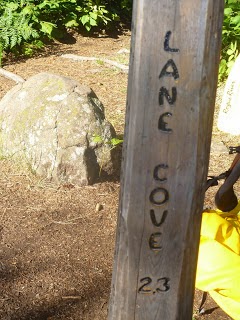 Last hike!! It was worse going back to Mott than it was getting to Lane Cove, because the hill up from Lane Cove is incredibly steep. Angela and I both got stung by a yellow jacket- Angela on the lip, and me on the thumb. 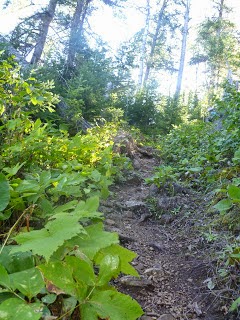 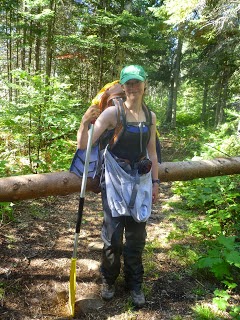 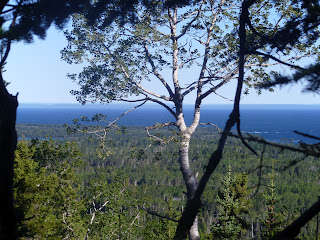 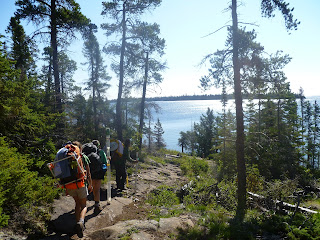 We made it back to 3 Mile, and collapsed on the dock. Then, we got a ride back from the ever gracious NPS! We seriously can't thank them enough. They were very helpful in getting us from place to place, and in giving us tips, hints, and information while we were conducting our research. Once again, thank you to everyone who contributed to Angela's project- we couldn't have done it without you!! :)

Once we were back to Mott Island, we packed up our things in a cart for the boat, and went to bed! Have to be up early tomorrow to leave on the boat! We were worried that the Ranger III wouldn't be able to make the trip, with the waters being rough. It did get there though, it was just delayed by a few hours. So our departure tomorrow is still on schedule! Can't wait to be back, but at the same time I'm going to miss it up here. Guess that I'll just have to come back.


Posted by Kimberly Anne at 5:21 PM No comments:

It rained so much last night! The rain ended up being really loud on the tarp, but we stayed nice and dry in our tent, and so did Angela and Jennifer in theirs. And our rock refrigerator was still standing strong!! There were gale warnings in the forecast for today, which we weren't looking forward to because of our inflatable boat. But it was the last lake, so we figured that we could accomplish anything we set our minds to, since we had accomplished so much already!! 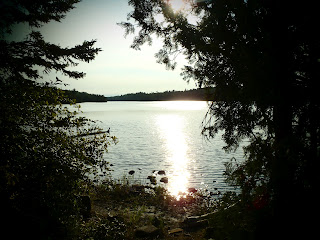 We did about an hour of backwoods hiking to reach our destination today- Ahmik lake! It was a really nice lake to end on- not too big. 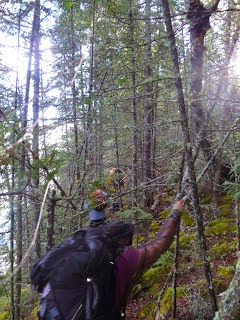 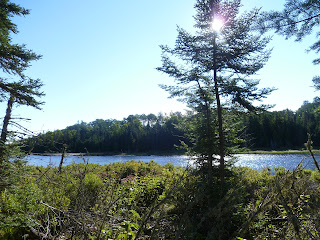 Also, finally on the last lake, I identified Utricularia intermedia correctly!! If only I'd gotten it right before the last lake. Ah well, better late than never! :)
We hiked back, made dinner, and processed our samples from the lake!! It's so surreal that we have no more lakes to sample... I don't think it's really sunk in yet. It was still really windy when we went to sleep- there were whitecaps out on the lake! Our last hike is tomorrow, and the next day we'll be leaving on the Ranger III!
Posted by Kimberly Anne at 5:20 PM No comments:

When Rachel and I woke up this morning, our tent was wet on the inside!! It hadn't rained at all, so we figured that it was just condensation that had somehow collected overnight. We had to evacuate rather quickly though, because once we started moving around, our movements rustled the tent, making it rain all over us! Again though, my backpack stayed dry as a bone, because before going to bed I tucked it inside of my Helly Hansen raincoat! :D

After around half an hour of backwoods hiking, we arrived at Lake Patterson. 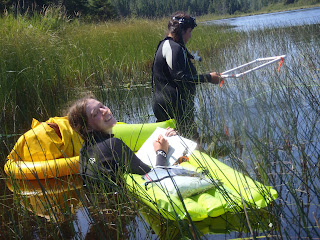 Because it was a fairly small lake, we finished sampling by 2:30 and were able to hike back! We filtered water and pressed plants, and then we played some card games. 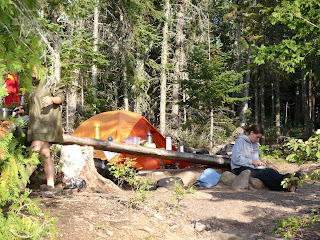 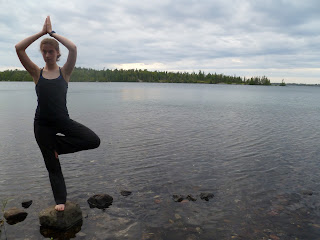 It started getting super windy as it got later, so we got a bunch of water from the shore with the Steri Pen before the waves were too unmanageable and hunkered down in our tents to ride out the storm. Rachel and I fixed a tarp above our tent with bungee cords, because after last night we're sort of doubting the waterproof quality of our tent...


Angela also fashioned a rock-refrigerator in the shallow area of the cove, in which she kept our bottles cold! The bag that they were in was weighted down by a rock, and that bag and rock were covered in other rocks. They're really kept cold in there too, since the water is icy cold! 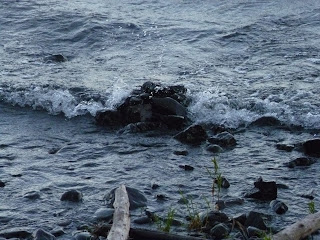 Hopefully everything's still in one piece in the morning!
Posted by Kimberly Anne at 5:20 PM No comments:

The 13th was our third sanitation day on this leg of the trip!! Basically the day consisted of sanitation, lots of relaxing and attempts at finishing laundry, and some more s'mores. We got some much needed rest that we knew would come in handy the next day when we hiked to Lane Cove!

On the 14th, we packed up early (again, with minimal personal gear) and got a ride from NPS staff to the dock at 3 Mile. Then we hiked the 5 miles to Lane Cove! It was a fairly tough trail because of some of the sharp inclines and declines along the way. There were lots of fantastic views though that made the trip much more bearable! :) Once we reached Lane Cove, we set up our tents, had lunch, and prepped for sampling again tomorrow! 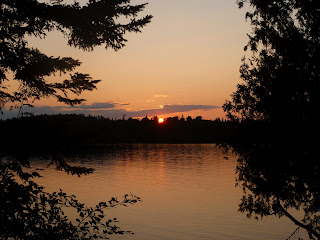 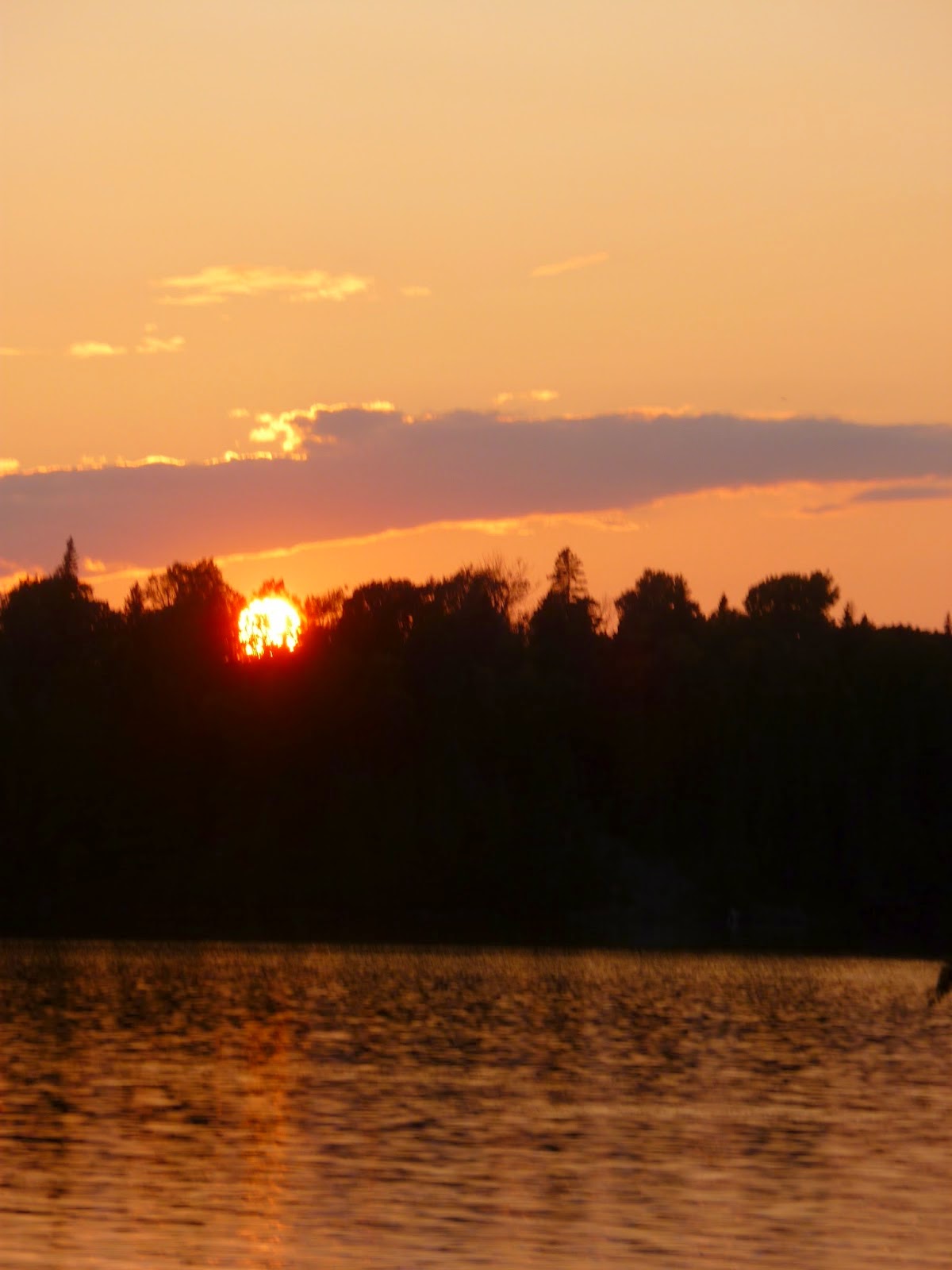 Posted by Kimberly Anne at 5:20 PM No comments:

After breakfast today, we hiked straight to Lake Ojibway with all of our sanitized gear! We had to do a tiny bit of backwoods hiking, but not much- the hike wasn't bad at all compared to the other ones we've done. The lake looked really interesting at first glance, because the surface of a lot of the water was completely covered in a plant that I later found out was called Brasenia schreberii. 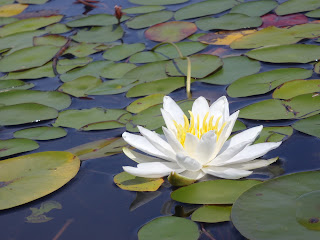 At first, I thought that it would be really fun compared to our other lakes- the leaves and flowers were so pretty, and walking through them felt really cool! However, as soon as we started needing to swim and gather samples, it wasn't so fun anymore. :P Our feet got tangled up in the floating vines, and it became hard to make any kind of progress in moving through the lake. But we figured it out eventually! It was also a pretty cold, dark lake since the leaves of the Brasenia covered the water, making it almost impossible for light to get through to the bottom. And to get sediment porewater samples, we had to first get our core sampler past the thick mat of stems on the bottom of the lake. It was certainly a challenge!!

We saw a moose with two babies on the other side of a small cove in the lake!! They were closer than the ones that we saw before in Moskey basin. So we've seen 5 moose in total now! Wow. :)

At one point in the lake, I looked down and saw leeches swarming around me like sharks around a shark tank. o_O Angela asked if I wanted the camera, but I said no. Didn't really feel like immortalizing that moment on film, hahaha. I'm a lot less frightened of lots of things after spending time on the island though! I'm not really too scared of spiders or yellow jackets anymore, and the fear of leeches is wearing off too! Look at how brave the island makes you. :)


We also decided while swimming out of the lake that the four of us are superheroes. Angela is the Fearless Leader, Jennifer is Super Sass, I'm The Facemaker, and Rachel is... Batman. Seriously though. :P

Hiked back from Ojibway to Daisy, and we immediately loaded up the canoes and rowed back to Mott Island for processing! Even though we were tired, we knew that it would be worth it to get there as soon as we could, while the weather was relatively nice. After getting there safely, we filtered all of our water samples and treated ourselves to some s'mores! Delicious!! :D 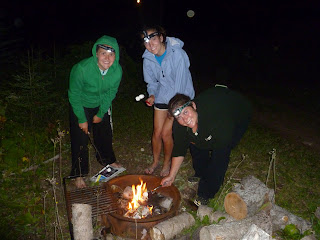 Before going to bed, I found a leech on my sleeping bag! Not exactly sure how that happened, sine I had been out of the water for over 7 hours. But I got a video of him! The way that they move is pretty cool.

Hope that there are no more... o_O
Posted by Kimberly Anne at 5:20 PM No comments: